My dive back into sports cards has been fun. I've managed to find some lost gems, realize most of my junk wax is useless and made some great friends along the way. I've also been able to share a bit of my love with those around me, and a few months ago I found myself talking to a coworker about football cards.

She is a pretty big football fan, but not really a card collector. Her husband is in the same boat, but a friend of his had given him a few boxes of cards a year or two ago. He held on to them for a while, but as they recently bought a new house they both realized they had no use for the cards. Hence, an email to me and a the P.E. teacher at the elementary school where I work.

Him and I decided we'd simply split the cards. We are both big fans - especially football - and we didn't want to be the "I got here first" guy. So we decided to simply split them fairly evenly. On a recent trip back to the school where I work, I swung by her place and picked them up. Here's a look into what was found.

There were two large boxes containing complete sets or other boxes of cards. There were also two monster boxes full of cards. 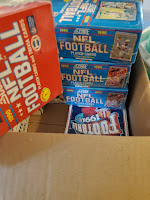 When I looked in the first box, it was mostly unopened cases of packs. Nothing special, just 1990 Score football (Series 1 and 2) and 1991 Upper Deck. The 1990 Score set had some rookies but nothing that really stands out as Emmitt Smith was a supplemental card to the set and 1989 had all the good guys. The 1991 Upper Deck may contain a Brett Favre rookie, but nothing Earth-shattering.

Any thoughts I had of maybe ripping some packs were put to rest as I dove deeper. I found 3 complete 1990 Score sets, still factory sealed. That means I get a set, the P.E. teacher gets a set and we can do whatever with the third set. 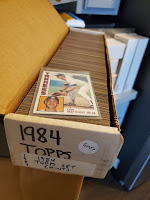 As I dove into the next box, I found some real gems. First, I found a complete 1984 Topps baseball set. In fact, it even had the Don Mattingly in a penny sleeve on top of the rest of the cards. Also included was a complete 1987 Donruss set - McGwire, Bonds and all. Right there, I figured I made out well.

There were some other complete sets: two 1988 Topps football sets, a 1991 Fleer football set and a 1990 Fleer basketball set. The '88 football has the Bo rookie and a few others, but nothing amazing from these. 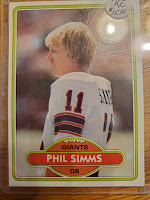 The monster are amazing. Obviously, this family friend of my coworker was a card salesman. It was two complete boxes alphabeticalized of football players. There were early 80s and early 90s cards throughout.

There were several top loaders in one row, and digging through I found a Phil Simms rookie, several Ottis Anderson rookies as well as some other big names from the early 80s. The Kevin Butler 1990 Fleer error card in a toploader seemed excessive.

As I dug through the box, I realized there are a lot of sweet names in there I remember from my collecting days. Emmitt Smith, Barry Sanders, Deion Sanders and a boatload of Packers. It will definitely help fill my junk wax fix. 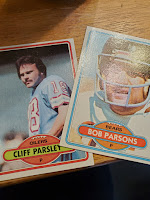 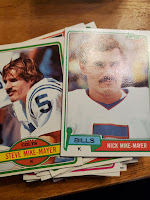 In an odd connection, I found two players whose names seemed interesting. Steve Mike-Mayer and Nick Mike-Mayer may seem like obscure players to some - they sure were to me - but being a man whose last name is Mike it caught my eye. Obviously, Mike is not very common as a last name, so I thought "maybe there's a connection."

Long story short, my grandfather traveled the country with the military and had at least three wives. I have family in faraway states whom I've met maybe once or twice due to them being half-uncles on my dad's side. So, seeing two men with a last name containing Mike, my interest was piqued.

It was all for naught, however, as it turns out. Their father was a Hungarian soccer player. He left when the country joined the Soviet bloc and went to Italy. From there, he moved the family to the U.S. So, no family connection, as my Mike side comes from Syria - and the last name Mike is only because my great-grandfather's name was switched from Mike Abraham to Abraham Mike at Ellis Island. 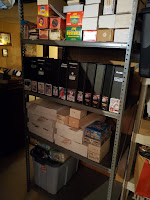 After talking with the P.E. teacher, here's how the cards are being divvied up. I went through and pulled one of each card in the monster boxes (nearly every card had 3 or 4 copies) to give to him. I added some of my own cards to fill out the monster box, as in the end I'm taking more than him.

I divvied up the sets, setting him up with more football and I with more baseball. I even added a Jordan Love rookie to his pot just because I am ending up with more cards and he'd rather have that than 20 copies of a 1990 Jim Richter card.

The '87 Donruss baseball, '88 Topps baseball and '91 Fleer football look nice in my collection, and the '84 Topps was a longtime desired set, so I am keeping that one. 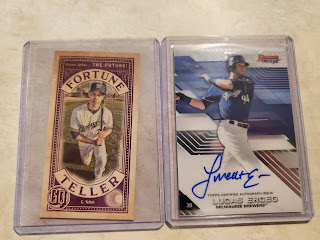 Yes, I know that's cliche and lame, but that's how I am approaching my collecting in 2020.

It was about 4 1/2 years ago that I dug my sports cards out of the basement and took some time to go through them. In that time, I discovered many retail possibilities for accumulating new cards. I could get them at Target, Walmart and even Walgreens. I started buying a lot of baseball cards, a good amount of football cards and some basketball cards.

Then, I discovered Twitter's card community. It drug me in even deeper. I started buying for buying's sake, and suddenly I have piles upon piles of cards to sort. And this is AFTER I SORTED ALL MY BASEBALL CARDS.

Sorry for the all caps, but it was that realization that made me reassess what it is I want out of this hobby. Accumulating numbers isn't it.

Also new to my interests is that the spousal unit and I have decided to really crack down on a budget in 2020. We really want to wipe out some debt so her and I c…
Read more 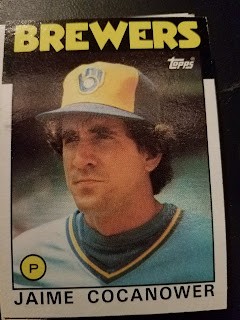 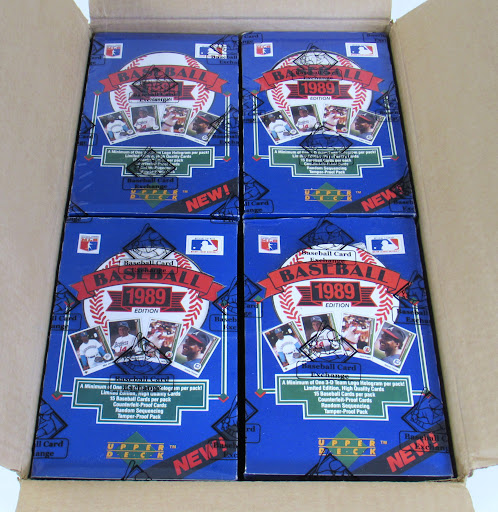